Chat with us on WhatsApp

From a dream, to making it a reality, Mr. Pradeep Pachpatil, CMD, Somanda Vineyards has come a long way. The journey has been one rollercoaster ride and today Soma Vine Village stands tall amidst the lush green vineyards that have been nurtured with utmost love and care. PSP’s life story is a tale of sheer grit, hardwork and determination. Coming from an agricultural background, PSP worked his way up to get himself a Master’s degree in Chemistry, post which he joined GNFC, Bharuch. It was on a chance visit to Pimpalgaon, where his relatives lived, little did he know, his destiny was going to change. A winery named Pimpane was going to be inaugurated in Pimpalgaon and this was where PSP met the Chairman, Mr. Madhav Rao More. Mr. More was looking for an Asst. Winemaker. At Mr. More’s behest, PSP decided to stay back and learn wine making. He had trained under a French winemaker, Mr. Jean Manuel Jacquinot, who owned a Champagne House, which was their family business in Epernay. 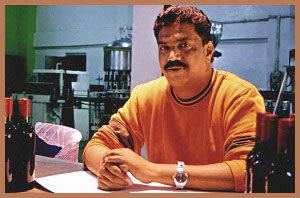 It was in 1988 when PSP, first stepped into the Wine Industry. After a 3 year stint with the French Winemaker JMJ, PSP then took a step ahead and moved to Indage India , Narayangaon. This proved to be another valuable learning experience. After an 8 yearlong stint, PSP then moved back to his beloved hometown, Nashik. He worked with Sula Vineyards as the senior Vice-president Operations for over a decade, which was then in its infantile stage and was more of a small, boutique winery and then became a massive success. It was during this time he trained himself in the art of wine-making in the company of Chilean, French, South African and American winemakers, making him one of the foremost winemakers in India. He worked closely with Mr Kerry Damsky, a wine maker from California for about 13 harvests. He has played a pivotal role in building a strong foundation of the Indian Wine Industry.Travelling far and wide in his quest to learn more about winemaking PSP observed that a concept of winery tourism & agro tourism was not just a lucrative business idea but also a refreshing one. After all, who wouldn’t like waking up amidst lush greenery in the lap of nature. In 2006, he built a farmhouse on a 10 hectare land with a private pool. This was when suggestions started pouring in to rent the place to travelers who would like to spend a day or two close to the vineyards. What began as a suggestion soon became a popular idea and soon it was leased to Sula, the famous wine makers, to look after and manage the property. Within a year, the demand for accommodation at the villa grew massively. This was when, PSP decided to extend his property and make it into a resort; a 32 room vineyard resort took shape which was also run by Sula as ‘Beyond’. Today this beautiful resort and Soma winery is run as a family business, and its biggest strength is the constant and immense support that the Pach Patil family extends to the business.It is one of the most sought after destination in and around Nashik and has made a mark for itself for being India’s first vineyard resort. In 2012, PSP started his first boutique winery. This was the place where fine wines were made from the grapes grown in the vineyard, under the watchful supervision of well trained staff and PSP himself, under hygienic conditions and with a lot of love and affection. Wines from Soma’s winery taste fresh and better as compared to the wine made and sold under the three tier system, as India is a tropical country. PSP believes that wine lovers will prefer to buy fresh wines from the winery for their personal collections. The white wines were launched in August 2014 after 1st harvest in January 2014 PSP’s vision is to create an ideal boutique winery business model that would inspire and benefit farmers and budding entrepreneurs wines.

Mrs. ManjushaPachPatil, is not just the support system of Soma, but also plays a pivotal role in the company as a Director. Armed with a rich experience of over 12 years in the field of agriculture, she takes special care of the vines which further yield fine wines.